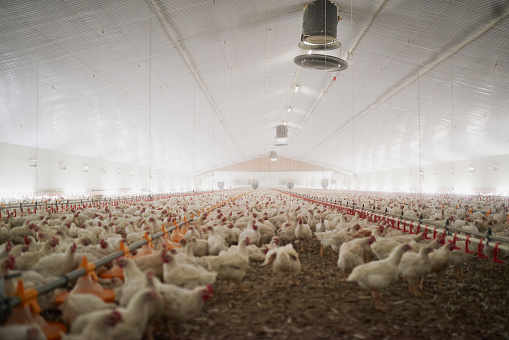 Industrial livestock production systems are characterized by their relatively large scale, a high level of specialization, limited direct land use, reliance on off-farm production of feeds and other inputs, and use of high-productivity breeds. Pig and poultry are the predominant species found in these systems, but dairy and beef may also be produced in such settings. Industrial livestock production systems are found all over the world, although mostly in middle- to high-income countries, where their development took place in response to high demand, well-developed infrastructure (making transport and processing of inputs and outputs feasible), and a relative scarcity of land.

Industrial pig and poultry production systems evolved from more circular forms of production, such as backyard systems where livestock scavenged for feed, or feed was supplemented with kitchen wastes and locally available food processing residues. Scaling up of such backyard systems, driven by demand for meat products and/or pressure on land, is often not a gradual process: When the number of pigs or poultry on a farm or in a geographical location increases strongly, feeds need to be sourced externally, housing is required to control the production environment and avoid predation, livestock health becomes an issue because of the high concentration of animals, and the local community may complain because of odor, water, and air pollution, and animal welfare perceptions. This result in the need for sophisticated buildings and equipment, thus in higher production costs, which are generally offset by strong economies of scale. Consequently, pig and poultry production is generally found either as backyard systems or as medium- to large-scale industrial systems without much space for intermediary systems. In most low- to middle-income countries, backyard pig and poultry production is an important contributor to monogastric meat production. For example, backyard systems contribute about one-third to China’s pork production and are the major supplier of pork to Vietnam.

Farms with these systems often have large nutrient surpluses because of the high nutrient imports through feed and the limited land available for the application of the nutrients in manure. Discharge and involuntary losses of nitrogen and phosphorus may occur and cause pollution of soil, water, and air, with repercussions on biodiversity, climate, and human health. This issue is exacerbated when production units are geographically concentrated, overshooting the recycling opportunities of neighboring lands. The concentration of animal production in and/or in the vicinity of densely populated areas also raises societal resistance related to odor, transport movements, animal welfare, noise, landscape aesthetics, and local pollution. High manure transport cost is a key constraint to viable land/livestock balances. One the one hand, large production units have larger surpluses than medium-scale units which increase the risk for environmental pollution. However, large operations generally have better access to technology and finance, and can also tap into economies of scales to develop manure processing and treatment approaches that are out of reach on medium-scale operations (Principle 5).

Globally, pigs and poultry account for about 9% and 8% respectively of global greenhouse gas (GHG) emissions associated with livestock. This contribution is mainly through emissions associated with feed (60%) and manure storage and processing (27%). Consumption of fossil fuel is the highest for this context, taking place along the entire supply chain, e.g., fertilizer production, transport, machinery, animal houses, and cooling (Principles 5 and 6).

Feeding animals with high-quality feed is the norm in these industrial systems. Although crop residues, agro-industry byproducts, and household waste also contribute to the ration, these systems highly rely on products such as maize, soy, wheat, and barley grown on arable land suited for food crops. The resulting pressure on land and water, land use change, and biodiversity losses tendentially caused by feed production are important issues associated with industrial pig and poultry production in this context (Principle 4).

In the livestock intensive production systems, there is little regard for the animal’s natural behaviors or needs. Although prohibited in some places, poor practices remain prevalent elsewhere. For example. birds’ beaks are often cut off to prevent them from pecking each other and tails of cows and pigs are amputated (called docking). Animal behaviors, like pigs rooting in the soil or chickens taking dust baths, are stifled when animals live in cages or in houses with concrete or slatted floors. (Principle 3)

In extreme cases, animals are raised on top of their own excrement, breathing poor air quality with high levels of dust, aerosol particles and gaseous ammonia, and are under continued stress due to overcrowded housing, predisposing them to respiratory conditions. Furthermore, due to their close living quarters, lack of clean areas, and weakened immune systems from lack of exercise and nutrition, animals are more susceptible to disease. Although antibiotics were originally used to treat infections from various pathogens, they are also used improperly to prevent infections, and as additives for feed and biocides for growth promotion. Given the density of animals, good animal husbandry practices, biosecurity, and vaccinations are needed in these farming systems – unfortunately this is often compensated by the excessive use of antimicrobials – driving AMR. Therefore, special attention is needed for the proper, prudent use of antimicrobials and protect against antimicrobial resistance. (Principle 6)

In medium to large-scale operations, the lack of sufficient biosecurity measures, particularly in terms of contact between wild and domestic animals, presents potential for inter-species pathogen spillover and potentially livestock and zoonotic disease outbreaks. The first emergence of Nipah virus is one example, with emergence resulting from bat-pig contact, likely via bat-contaminated fruit. Limiting wild-domestic animal contact through measures such as enhanced animal housing, avoiding fruit orchards that attract wildlife near livestock operations, and avoiding placement of rearing operations in wildlife habitats are possible approaches to reduce risk. (Principle 2, 5)

Foodborne illnesses are usually infectious or toxic in nature and caused by bacteria, viruses, parasites or chemical substances entering the body through contaminated food or water. Examples of foods involved in outbreaks of salmonellosis are eggs, poultry and other products of animal origin. Foodborne cases with Campylobacter are mainly caused by consumption of raw milk, raw or undercooked poultry, and drinking water. Proper diets and nutrition can be key in both maintaining livestock health as well as contributing to food safety. For example, cattle are natural reservoirs for pathogenic E. coli, and cattle fed mostly grain have been shown to have lower colonic pH, meaning they are more acidic, thus creating an ideal environment for increased numbers of acid-resistant E. coli compared to cattle fed only hay. (Principle 4)