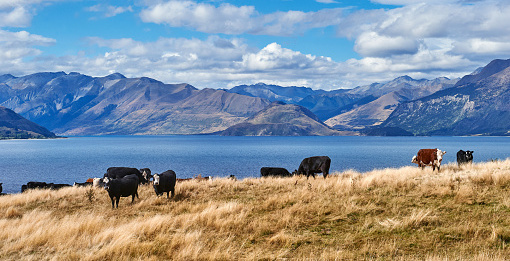 In temperate to cold climates, commercially oriented grazing systems are found where climate and soil conditions favor natural grasslands as the common vegetation. Examples of regions with such grazing systems are Central Asia (e.g., Kyrgyzstan, Tajikistan, Uzbekistan), Latin America (e.g. Uruguay, Argentina, Chile), and Africa (e.g. South Africa, Botswana). Land use in these countries is dominated by commercial, extensive cattle (mainly beef) and small ruminant production on small- to large-scale private farms and ranches. The size of such farms or ranches depends on the productivity of the land and may range from a few hectares to a few thousand hectares per farm or ranch. The land is usually privately owned. Breeds, both local and crossbred, are well adapted to the conditions of production and both specialized (beef), and dual purpose (beef and dairy) are found.

In this context, beef production most often comprises three stages, which can be found together on one farm as well as separately on specialized farms. In the first stage, the breeding of calves, feed, and animal health inputs are used for reproduction and the production of milk (the primary feed for calves during the first months of life). After the calves are weaned, they enter the second, intermediate feeding stage in which they graze on pasture and rangeland and grow slowly until they reach a certain weight (about 300–400 kg). The time required to reach this weight may vary from one to several years. In the final fattening stage, a high growth rate (approximately 1 to 1.5 kg/animal/day) is achieved based on high quality and quantity of feed inputs. This last stage can be shorter or entirely absent in some situations. Hence, beef production systems on natural grazing lands are in part (the breeding and intermediate feeding stages) extensive, low-input systems generally combined with a final fattening stage, high-input system. Intensification of the breeding and intermediate feeding stages is often economically unfeasible. In contrast, dairy production in these regions is most often low-input/low-output systems, found predominantly among smallholders. Such systems also require some inputs (feed, health, breeding) to achieve economically feasible production levels.

While grasslands are the predominant natural vegetation in many countries with this type of system, crop production is also found in those regions with adequate water availability. Depending on economic conditions (i.e., crop prices, subsidies, and other national institutional support), farmers may alternate between crop production and livestock. One example of such a country is Kyrgyzstan, which has 9.5 million hectares (ha) of grazing land and 1.5 million ha of mostly irrigated cropland. Wheat production once was an important contributor to the national food supply, but several factors (e.g., suboptimal management of the irrigation infrastructure, soil degradation, low wheat prices) have made wheat production unattractive and resulted in some substitution by wheat imports. As a consequence, farmers shifted to dairy production and horses in the former crop areas.

Grassland used for ruminant production in regions with unfavorable conditions has the risk of overgrazing and grassland degradation. Grassland degradation is observed as vegetation cover is altered (reduced or even entirely eliminated, or evolving from grass to shrub), and signs of soil erosion appear. It reduces production potential but also biodiversity, the amount of carbon stored in soils, and the replenishment of aquifers. Grassland degradation is reported in many of the countries where this farming system is found (Principles 2, 3 and 4).

Extensive meat production in such regions from cattle, sheep, and goats has high direct GHG emission intensities. GHGs may also be emitted from grassland degradation. Livestock system intensification for beef and dairy, and in particular the fattening stage of beef systems, also generally increases the use of emission-intensive feeds, such as maize, soy, wheat, and barley. These crops, furthermore, are grown on arable land suited for food crops. The resulting competition for land and water between human-edible food and livestock feed production is an important issue associated with the intensification of livestock production in these regions (Principles 2, 3 and 4).

The three stages of commercially oriented grazing systems - found together or separately on specialized farms. The first stage consists of reproduction and milk, the second is grazing on pasture/rangeland, and the third an optional final fattening stage. Each stage has different animal health implications. While commercially oriented systems typically make significant investments in animal health, many health issues remain common such as respiratory diseases. Extensive planning, including disease prevention, preparedness, and traceability are especially key in these commercial systems where large amounts of livestock are potentially exchanging many hands, mixing of animals from different herds, along with safe, efficient and animal friendly transportation that minimizes stress. Furthermore, despite good planning and infrastructure, intensified systems with compromised good animal husbandry practices, especially regarding hygiene and sanitation, often trigger excessive use of antibiotics, thus contributing to antimicrobial resistance. (Principle 1, 6)

The first stage is a low-input system. The calving period is a critical period for the cow as well as for the calf. The mother is particularly susceptible to reproductive disorders in this period and her future reproductive capacity and productivity may be compromised. The newborn calf is particularly vulnerable to the physical ambience and pathogens. A poor start in life can make the individual less robust and more susceptible to diseases throughout life.  Animal health issues can arise especially later due to poor planning at the first reproductive stage. Cowherd programs that strengthen herd immune systems and health plans of calves should consider both current and future location of the calf if moving to another specialized farm, which may involve other necessary health plans, such as another vaccination plan. Animal health status will highly depend on the type of contracts and aggregation practices between the smallholders and the “specialized farms”. While the specialized farms under the contract farming system provide smallholders with GAHP technologies, common intermediaries and aggregators may not take measures to reduce risk of disease transmission. (Principle 2, 4)

In the second stage is a low input extensive system, grazing beef cattle in temperate climates can be susceptible to a variety of diseases. Proper grazing management practices can ensure proper forage quality and quantity for nutrition. Due to changing climactic seasons in temperate regions, timing of proper management practices can be critical. Overgrazing can quickly become a problem in commercially oriented grazing systems, leading to resource scarcity and thus stress or nutritional issues. Grazing livestock are also at greater risk of parasite/pathogen exposure and overcrowding on pastures increases the risk of increased gastrointestinal parasite burden.  Changing conditions due to seasonality and improper management can lead to various livestock diseases (i.e. plant or mold toxins, nitrate poisoning, prussic acid poisoning, pasture bloat etc.). Other conditions such as fescue foot can occur in cool or cold seasons.  Internal and external parasite control is also location specific and will vary based on seasonality. Changing climates will also continue to alter disease transmission through unknown and complex interactions of vectors (i.e. zoonosis through the animal-human interface), as well as increase livestock stress and disease susceptibility. (Principles 2, 4, 5).